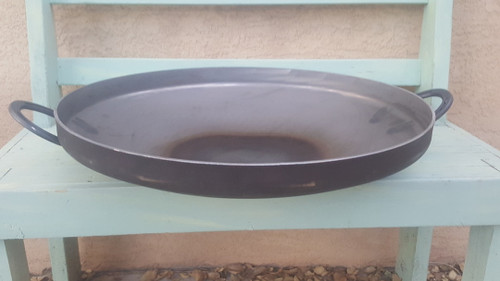 The MOAB run features a 2" formed rim around the discada and is a favorite!

The Moab Rim trail is one of our favorites of many Jeep trails in Moab that we enjoy rock crawling on and what better way to share this than name one of our Disco's after this beautiful 4x4 trail.  A big hit with us at the Annual Easter Jeep Safari in Moab is our Southwest Discada's!! Maybe we will see you there!?

The Moab Rim is the cliff rim seen just to the southwest of Moab. Its only four-wheel-drive access begins just down river from town and the first mile has about the highest density of obstacles of any of the area trails. Many vehicles have "bit the rocks" on the succession of rock ledges and tight turns that lead to the rim. On top, the trail is sand and rock as it leaves the rim, but it returns at another overlook. A spur, sometimes used, visits Indian ruins and rock art. After closing a short loop, the trail returns on the same rocky mile it started with. A formerly used trail loop to the famous Egg Ranch Fin and Death Row has been closed for more than ten years to all motorized travel by BLM's Resource Management Plan.