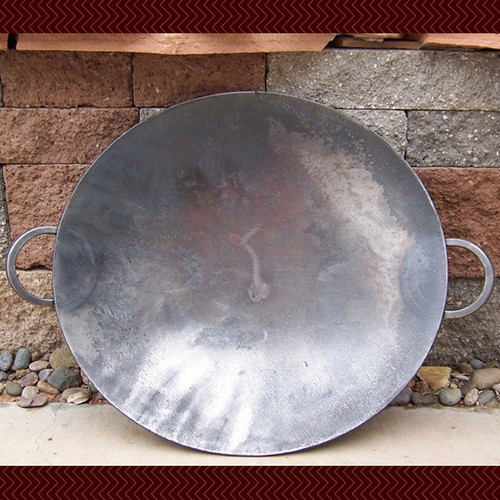 This 22" cooking disk features 1/2"  tube formed into a circle handles that we call "The Angel Fire" after Angel Fire New Mexico.

Take it from us.... we have been making these for many years and they are definite "show stoppers" and you will delight and impress family and friends with this unique style of cooking. From small preparations to large parties this disk handles it all. Southwest dishes, traditional, fish fry's, spectacular breakfasts, juicy steak fajitas, vegetarian delights to grilled nutter butters...this discada will handle it all!

The Legend of Angel Fire & the Enchanted Circle Scenic Byway

The Enchanted Circle Scenic Byway has a taste of everything that's New Mexico. It links the oldest continuously occupied residence in New Mexico, Taos Pueblo, with Angel Fire, which was incorporated in 1986. It is home to the United States' first memorial to Vietnam War veterans. It passes by Elizabethtown, New Mexico's first incorporated town, now a ghost town. Much of the Byway traverses land formerly part of the Maxwell Land Grant, once the largest private individual holding in the western hemisphere.  The circle closes in Taos, entering town on tree-lined Kit Carson Road. What more could a traveler ask than a road that ends at its beginning......

The Moache Utes, a nomadic people, gathered in the Moreno Valley in the summer and fall. According to legend, they called the glow against Agua Fria Peak the "fire of the gods."
When traveling Franciscan friars came through the area, they transposed the name into "the place of the fire of angels."  The mid-1800s would see the arrival of Lucien B. Maxwell and Christopher "Kit" Carson, who would soon coin the phrase "Angel Fire," in 1845.
In 1954, Roy and George LeBus bought the 9,000 acre Monte Verde Ranch and in 1956 purchased another 14,000 acres, comprising the Cieneguilla Ranch, from the Maxwell Land Grant Company. Ten years after the initial purchase, they decided to develop the property into a resort community. They called the new development "Angel Fire", the phrase that Kit Carson had long ago coined after the old Indian lore.