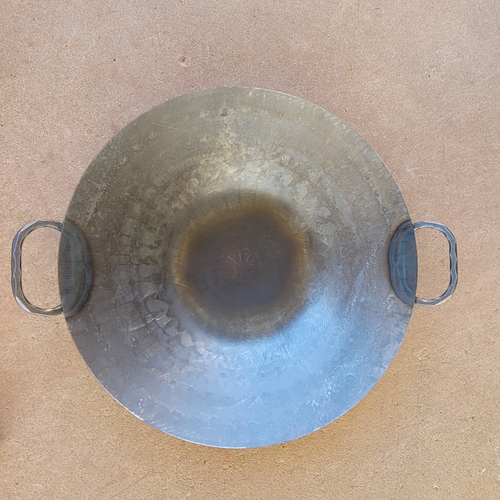 This 22" discada/disco cooking disc features our bomb-proof big 1/2" solid steel oval handles (NEW**** HAMMERED DESIGN) which is why we are calling this design the TRINITY. The Trinity site in New Mexico is where world's first atomic detonation took place on July 16, 1945

The Nuclear Age was ushered in with the world's first atomic detonation at Trinity Site on July 16, 1945. Trinity Site is located on the northern end of Whites Sands Missile Range in central New Mexico. Trinity Site, now only mildly radioactive, is open to the public for one day, twice a year.

Included on the Trinity Site tour is Ground Zero where the atomic bomb was placed on a 100-foot steel tower. A small monument now marks the spot. Visitors also see the McDonald ranch house where the world's first plutonium core for a bomb was assembled. The missile range provides historical photographs and a Fat Man bomb casing for display. There are no ceremonies or speakers.
Trinity Site is open to the public twice a year--on the first Saturday in April and October.
Trinity Atomic Web Site