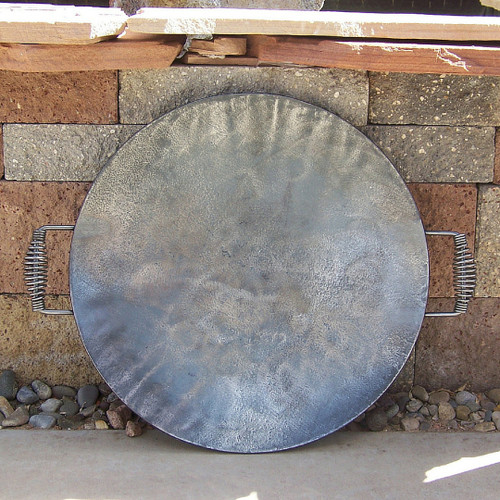 This 22" cooking disk features 5" BBQ handles that we call "The Springer" after Springer New Mexico.

SPRINGER, New Mexico
Where the High Plains Meet the Foothills

With a history as colorful as the buildings that line its streets, Springer finds its beginnings in the turbulent days of the Maxwell Land Grant, when the Utes and Apaches roamed the territory, and trappers, prospectors, buffalo hunters, cattlemen, and outlaws sought their fortunes all across the land.

Springer was named for Frank Springer, a brilliant lawyer from Iowa who arrived in Cimarron on February 22, 1873. As attorney for the Maxwell Land Grant Company, he won stubbornly contested litigations which lasted nearly 20 years. An historic case was won in the U.S. Supreme Court, and it is said that Mr. Springer presented one of the finest land grant arguments ever made before that tribunal. Mr. Springer became president of the Maxwell Land Grant Company in 1891 and directed the development of this vast area into cattle ranches and farming, timber and mining enterprises. His CS Ranch brought one of the first herds of hereford cattle to the area in 1882. The CS Cattle Company is operated today by his descendants. He and his brother Charles were responsible for building Eagle Nest Dam in 1916. A man of many interests, he was a world authority in geology and paleontology -- his fossil crinoid collection is now in the U.S. National Museum in Washington, D.C. He was a founder of both New Mexico Highlands University in Las Vegas and the New Mexico Art Museum in Santa Fe.

Springer is also home to New Mexico'sfirst and only electric chair (complete with a battered glamour mannequin about to be fried) and a "shoe of a giant" -- a brown wingtip that once belonged to Robert Wadlow, the world's tallest man.